'Seeing' fencing for the first time 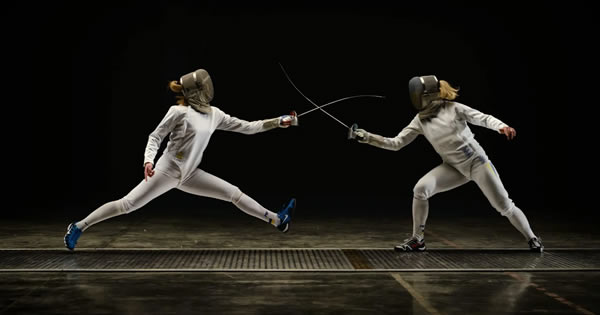 I love the Olympics. I love all sport but for me the Olympics is the pinnacle. For two weeks every four years I find myself enthralled by sports I would never normally watch. So far I have been loved the overwhelming joy of Long Quigquan, the Chinese weightlifter, as he achieved a new world record; the stunned pride of Majlinda Kelmendi, the Kosovan judoka, and the understated confidence of British swimmer Adam Peaty (and the overjoyed celebrations of his Nan!). In terms of the demands of the sport, it is fencing that has had me gripped. Watching Richard Kruse perform yesterday made me think about the visual demands of the sport – one of the few Olympic disciplines I have never worked with. Whilst fencers undoubtedly have to display exceptional reaction times and excellent eye-body co-ordination (check out the footwork as well as the hand speed!), they will also have to utilise their visual system to enable them to judge distances with more precision than most other sports. Being able to identify when you are close enough to reach your opponent whilst still twisting your body to ensure you are not struck simultaneously required great accuracy and timing. The smallest of miscalculations and your opponents score tally will start racing away from you. So how can fencers enhance this depth perception to give themselves the greatest opportunity? Well the visual skill which they will be making the most use of is stereopsis. This is the ability of the brain to use information from both eyes together to judge depth. This is why we have two eyes that are set slightly apart; so that they each have a marginally different view of the world and we can therefore use this difference to help us locate objects in space. Our brain combines the ever-so-slightly different images (called retinal disparity) that each eye feeds in and can tell that objects which are closer to us appear more different in these images than objects which are further away. This can be demonstrated by holding your index fingers up in-line with each other, in front of you. If you alternately open and close each eye you will notice that the closer the back finger is to your eyes, the less horizontal disparity there will be. As it moves further away (do not move your closest finger), it seems to move bigger horizontal distances. It is not just fencing which demands extremely accurate stereopsis. It was also demonstrated exceptionally by the New Zealand hockey player Kane Russell yesterday against Great Britain. Kane Russell goal He will have used stereopsis to track a ball moving towards him through the air – and he used is exceptionally as his first touch was excellent allowing him to move immediately into the shooting circle and score. Rugby players use their visual system in a similar manner when they are catching a high ball and any issues with this system become apparent when put under demands such as this. For example, I recently worked with a Premiership rugby player who was having issues under the high ball. He tended to display poor timing with the ball often hitting his chest and bouncing out, rather than being collected cleanly in his arms. In order to rectify this problem a full optical assessment was carried out and it was found that one of his eyes required a very small prescription (smaller than an optician would normally recommend any correct for), and this tiny disparity was manifesting itself in poor timing. Once identified the issue was relatively easy to solve. The player was fitted with a contact lens, just in his weaker eye, and underwent visual training to speed up how quickly his brain would respond to the visual change. Improvements were noticed within couple of weeks of training and what was once considered a weakness became a real strength. Research has also been published to show that training can improve stereopsis in athletes who have not been diagnosed with any issues. Clark, Graman and Ellis recently published an interesting study (2015, in Optometry and Visual Performance) on the stereopsis of college level baseball players. They found that following vision training stereopsis significantly improved from baseline. However, after around 6 weeks of no vision training, levels began to return to baseline. Lenoir, Maush, and La Grange (1999), also researched the impact of stereopsis by comparing the one-handed catching ability of individuals with high and low stereopsis ability. They found that those individuals with better stereopsis were better at one-handed catching (although their findings did not reach significance). Although the research is limited, it does suggest that stereopsis can be trained and does play an important role in performance levels in sport. There is clearly a need for further research in this area and is something that athletes in a range of sports should be keen to assess and improve.

Previous Back to Listing
Next