Yet another VAR blog: considering the vision of elite football referees 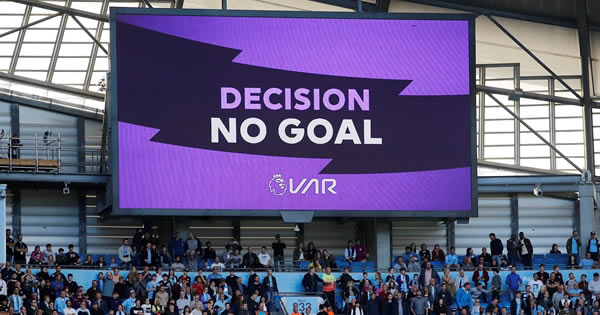 Well here we go again (some might say), yet another blog about VAR. After the dramatic climax to the pool B games on Monday night where crucial decisions were swung using it, now seems as good a time as any to chip in with my two-pennies worth.

Lucky for me (unlucky for those playing) getting the VAR decisions through took such a long time that I could flick from the Spain v Morocco game while a decision was checked to see if a goal scorer was offside, and the Portugal v Iran game to see if a penalty was going to be given. The resulting decisions had the outcome of the group hanging in the balance but eventually the usual suspects won through and we will be seeing Spain and Portugal continuing in the competition despite the fighting spirit and drama offered up by the smaller footballing nations.

Throughout this World Cup - the first major tournament featuring VAR - there has been huge debate on whether its inclusion is a positive or negative for the sport. My opinion on this is just that, an irrelevant opinion (for anyone interested I think the best way forward is to go with a hockey style referral system. I accept that this would create yet more changes to the game – rather than just improving decision making it would also require players to self-regulate, think clearly, and control their emotions in the heat of the moment – but eventually it would lead to a reduction in aggressive behaviour we see with players surrounding the referee demanding he change his decision, and it would improve players game intelligence as they would need to understand the consequences of their referral). If you wanted an opinion on the positives and negatives of VAR there are better placed people to listen to – either those who can tell us about the advancing technology, or the players and officials themselves who can tell us how it is affecting their experience. So instead of continuing down that line of enquiry, I am going to contribute in an area I am perhaps more qualified to speak in – is there a more human alternative to VAR whereby we improve the referees vision and decision-making skills so that it becomes less necessary for the technology to intervene?

So, what do we currently know about how well referees can see? Well a 2017 study (Baptista et al.) tested 92% of top level officials from the Portuguese league – many of whom also officiate at an international level – and found that around 18% had not had an eye test in the last three years (if at all). I find this astounding. Everyone should be having an eye check up by an optometrist at least every two years, even if you do not think you have any problems. For individuals whose career so heavily relies on their vision there should be a mandatory requirement for them to have their eyes examined every year. Further, the study also found that around a quarter of the officials could see better if they were fitted with the appropriate glasses or contact lenses. This study only looked at the static visual acuity of officials which is their ability to see fine detail while they are stationary. This is not, perhaps, the most important thing for a referee to need their eyes to do (when both they and the ball and players around them are constantly moving) but to me it seems a very good place to start and is an essential building block to put in place.

If we think about the most visually challenging tasks that football officials are required to undertake, then calling an offside decision has to be up there. They must be able to track the movements of at least 4 different moving objects (two defenders, attacker in question, ball), and that doesn't take into account all the other players moving around in the field of view. By breaking down the stages that the visual system would have to go through, it will take a minimum of 160ms (assuming all players and the ball are grouped so closely together that the official's eyes do not need to change position) to process the required information - by which time everyone will have moved again (Maruenda, 2004). It would seem as though we are asking the assistant referees visual system to perform an impossible task.

However, through experience high level assistant referees have developed visual strategies to help them overcome these difficulties. Instead of trying to look directly at all the different key points, they instead fixate on the offside line and use their peripheral awareness to maintain mindful of other important factors (Catteeuw et al, 2009). Whilst this does prevent certain problems associated with moving the eyes, it does seem to leave the assistant referees open to various perceptual illusions which can impact on their decision-making success. It appears it is not just in the offside decision that high level officials have developed superior visual techniques. Spitz et al. (2016) showed that elite referees look at more relevant areas of the body of players when assessing foul play situations than sub-elite referees. It may be possible to take these enhanced visual strategies and train officials to use them throughout matches to make better decisions. Advanced technique such as these are likely to be the first to break down under stress and fatigue which a study by Mallo et al. (2012) considered. They analysed decision-making of referees and assistant referees during the Confederations cup found that referees made most errors (23%) in the last 15 minutes of the match and assistant referees made incorrect offside decisions twice as often in the second half as in the first half. Referees made the least errors when they were only 11-15m away from the incident. To me this tells us that we need our officials to be fitter to enable them to remain close to play, and that errors later in the game may well be related to the onset of fatigue. Another explanation is that decisions made closer to the end of the game may seem to carry more pressure and therefore the officials need to manage their emotions better to prevent the onset of errors. The authors of the work themselves conclude that training sessions in the vision and decision-making demands of the game should be implemented to improve the consistency and skill of match officials.

Many studies have looked at whether visual training can improve performance in sport. My own research has shown that it can improve the visual skills of Olympic hockey players (Wimshurst et al, 2012), and both the visual and cricket skills of elite cricketers (Wimshurst et al. in press). Senior professional football players have also been shown to improve their visual skills following an eight-week intervention programme (Bahdur et al., 2016). If it can work for players, it makes sense that it should also work for officials. In fact, a study on expert referees found that those who made more successful decision had better visual skills (including peripheral vision, visual reaction time, recognition speed) than referees who made less correct decisions (Ghasemi et al., 2011).

To me it seems clear – we need to make our officials the best they can be, and then there will be less need for the controversial addition of VAR. To do this we need to consider their fitness levels, ensure they all see an optometrist for regular eye tests, and implement a programme of visual and decision- making training. Our referees will still be fallible – they are human after all – but if we are just after correct decisions at the expense of everything else that is great about the game we may as well do away with on-field officials altogether and design a machine that can analyse every aspect of the game as it occurs. So we need to decide – are we willing to accept human error in our officials as we do our players? And if so let's consider putting as much research, time, and money into making these referees as good as they can be as we do into other aspect of the game.

Previous Back to Listing
Next